XYY syndrome - a.k.a. Jacobs syndrome - concerns a relatively harmless genetic condition in which a human male has an extra male (Y) chromosome, giving a total of 47 chromosomes instead of the more usual 46. This produces a 47,XYY karyotype. Some medical geneticists question whether the term "syndrome" is appropriate for this condition, for, its clinical phenotype is normal; the vast majority of XYY males do not know their karyotype. Learning problems and delayed development of speech and language skills are about 3x higher in this population, despite normal/above average IQ.

Prevalence: close to 1 in 1,000 male births have XYY syndrome. 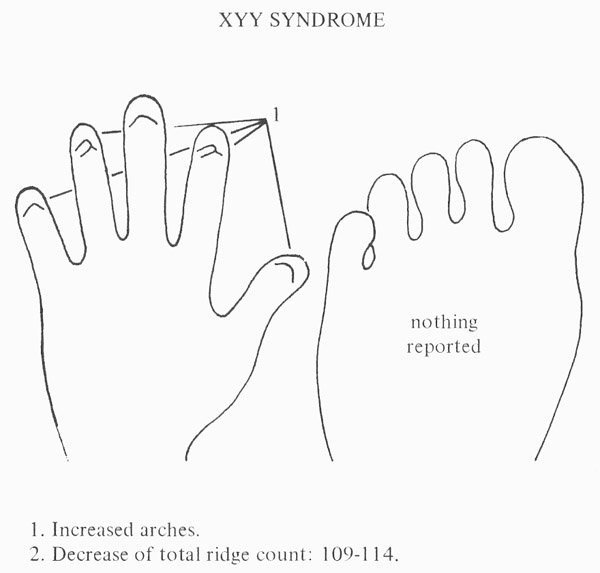 XYY syndrome is also featured with a relative low frequency of palmar patterns (with a relatively high percentage for ID2), but a t' or t'' triradius may be present almost twice more often (source: Rodewald & Zankl, 1981; p.99).

Clinodactyly involving the fifth finger is also often present (source: Bardsley et all, 2013). All significant hand signs listed above for XYY syndrome together cover only two out of the nine perspectives of the hand as defined according Multi-Perspective Hand Reading (including hand level 2, 5 & 8).

A summary of the most significant hand sign combinations in XYY syndrome (Jacobs syndrome) is described here:

Decoding the language of the hand:
hand sign combinations in XYY syndrome! Hand charts are available for many other diagnostic issues;
start browsing HERE