Prevalence: Present roughly one in 50,000 births.

One hand charts is available for Wolf-Hirschhorn syndrome describing the significance of various typical dermatoglyphics, often combined with a simian line - see picture below. 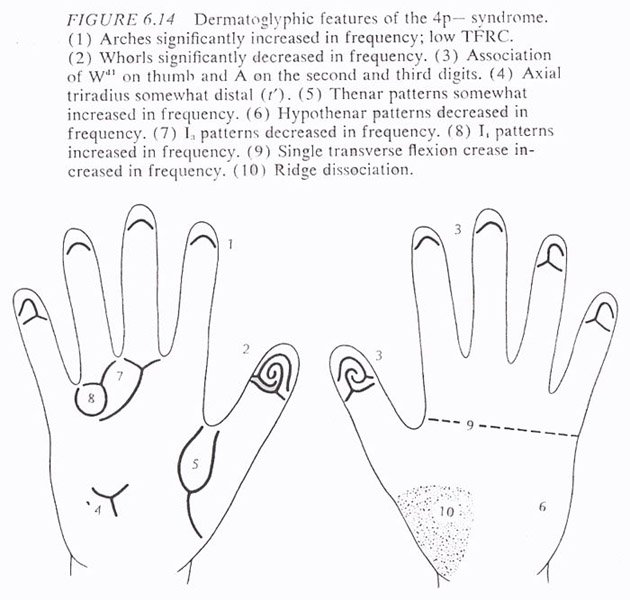 Clinodactyly (curved-in pinky fingers) is recognized as a common feature in Wolf-Hirschhorn syndrome; in a small study a prevalence of 20% has been reported (source: A. Battaglia et al., 1999).

Other typical finger features are: low-set thumbs, tapered fingers with narrow pink tips (source: W.R. Centerwall et al., 1975). And finger-like appearance of the thumb, and thin fingers with bilateral overriding of the second finger onto the third (source: A. Battaglia et al., 1999). 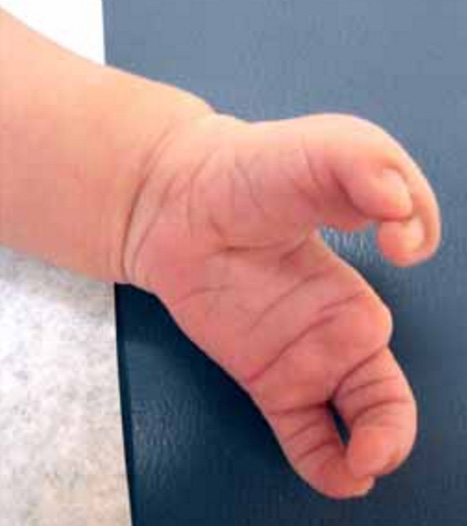 All significant hand signs listed above for Wolf-Hirschhorn syndrome together cover 6 out of the nine perspectives of the hand as defined according Multi-Perspective Hand Reading (including hand level 1, 3, 5, 7, 8 & 9).

A summary of the most significant hand sign combinations in Wolf-Hirschhorn syndrome is described here:

Decoding the language of the hand:
hand sign combinations in Wolf-Hirschhorn syndrome! Hand charts are available for many other diagnostic issues;
start browsing HERE