Arthrogryposis multiplex congenita (arthromyogryposis) is an infrequent cause of severe crippling, manifesting as congenital joint contractures in two or more areas of the body.

Prevalence: close to 1 in 10,000 people have arthrogryposis.

One rather superficial hand chart is available for arthrogryposis describing the significance of various typical features inside especially the dermatoglyphics, which manifest often combined with a simian line (= single transverse flexion crease) or Sydney line - see picture below.

Every joint in the body has typical signs and symptoms of deviation; for the wrist this concerns volar and ulnar deviation, and for the hand this manifests typically as fingers in fixed flexion combined with thumb in fixed in the palm (see photo below - both hands also have a simian line). 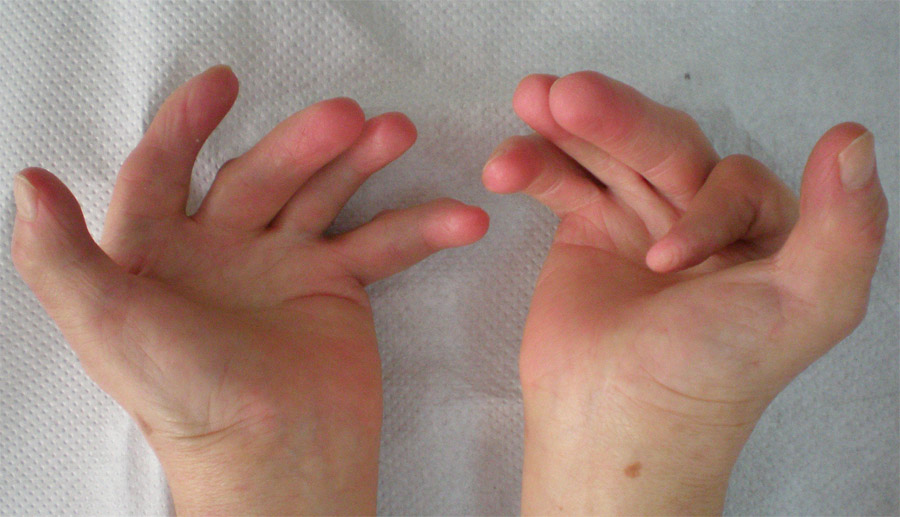 In newborns, the characteristics of the disorder may already be seen in their hands which are clenched, with fingers that overlap.

The characteristic features of distal arthrogryposis type 1 include: permanently bent fingers and toes (camptodactyly), overlapping fingers, and a hand deformity in which all of the fingers are angled outward toward the fifth finger (ulnar deviation).

The soft tissue envelope in congenital contractual conditions such as clasped- or arthrogrypotic thumbs is often deficient in two planes: the thumb-index web and the flexor aspect of the thumb. There is often an appearance of increased skin at the base of the index finger that is part of the deformity - see the hand displayed left below, which belong to a person who has a mild form of arthrogryposis (hand displayed right below had surgical correction). 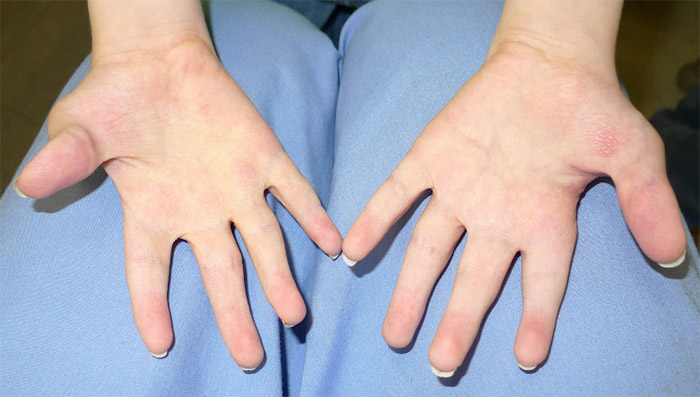 Arthrogrypotic thumbs (hand displayed on right side had surgical correction).
All significant hand signs listed above for arthrogryposis together cover four out of the nine perspectives of the hand as defined according Multi-Perspective Hand Reading (including hand level 2, 6, 8 & 9).

A summary of the most significant hand sign combinations in athrogryposis is described here:

Decoding the language of the hand:
hand sign combinations in arthrogryposis! Hand charts are available for many other diagnostic issues;
start browsing HERE